A Washington law firm has filed a federal lawsuit against the Food and Drug Administration (FDA) for interfering with the use of ivermectin as a treatment for COVID-19. H/T Epoch Times

The lawsuit was filed by Boyden Gray & Associates on behalf of three doctors who were disciplined for prescribing human-grade ivermectin to patients. The firm’s founder, attorney Boyden Gray, is a former legal adviser to the Reagan and Bush administrations.

Gray told The Epoch Times that the FDA had violated well-established law that allows doctors to prescribe an FDA-approved drug as an off-label treatment. Ivermectin was no different, he said. It was approved by the FDA in 1966. “Congress recognized the importance of letting doctors be doctors and expressly prohibited the FDA from interfering with the practice of medicine,” Gray said.

“That is exactly what the FDA has done time and time again throughout this pandemic, assuming authority it doesn’t have and trying to insert itself in the medical decisions of Americans everywhere.” The three plaintiffs in the case are k Marik is a founder of the Front Line COVID-19 Critical Care 21 Alliance (FLCCC), a national nonprofit that promotes alternative COVID-19 treatments to the government-touted vaccine.

“The FDA has made public statements on ivermectin that have been misleading and have raised unwarranted concern over a critical drug in preventing and treating COVID-19,” Marik told The Epoch Times.

“To do this is to ignore both statutory limits on the FDA’s authority and the significant body of scientific evidence from peer-reviewed research.”

According to Marik, more than 80 medical trials conducted since the outbreak of COVID-19 show that ivermectin is a safe and effective treatment for the virus. Gray said the FDA has engaged in unlawful interference with the use of ivermectin and should be held accountable for that. The lawsuit included several statements made by the FDA that Gray said show that the administration interfered with the use of ivermectin. 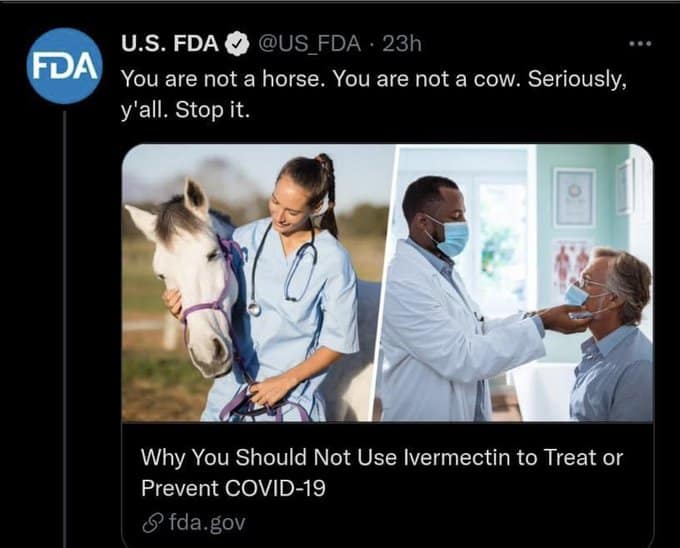 Marik, a critical care specialist, was suspended by Sentara Norfolk General Hospital for prescribing ivermectin as a COVID-19 treatment. Bowden, an ear, nose, and throat specialist, was suspended from the Houston Medical Hospital. Apter was under investigation by both the Washington Medical Commission and Arizona Medical Board for prescribing ivermectin. Marik was recently informed that he was under investigation by the medical licensing board in Virginia.

Gray filed the lawsuit in U.S. District Court in Texas. The doctors are seeking a permanent injunction that would prohibit the FDA from interfering with the use of ivermectin for the treatment of COVID-19.

Henry F. Smith Jr., MD explains at American Thinker Why Ivermectin was Disappeared.  Excerpts in italics with my bolds.

It’s a common occurrence in winter. A patient calls a primary physician to report a nonproductive cough, slight hoarseness, muscle aches, and a low-grade fever. The physician, and likely the patient, realize that this is almost certainly a viral upper respiratory infection. If the patient were in the office, the physician may test for a streptococcal bacterial infection, but it will likely be negative.

This is probably an infection with a rhinovirus, adenovirus, or endemic coronavirus. Despite this, the afflicted patient will happily proceed to the pharmacy to pick up their prescription for an antibiotic. The patient will feel as though the physician was proactive, something the doctor certainly understands.

This prescription, however, will be of no value to the patient and may actually cause issues. Yet pharmacies in the U.S. see this type of prescription thousands of times a day.

It occurs despite the fact that physicians are constantly reminded that gratuitous antibiotic prescriptions come with side effects and can lead to antibiotic resistance. Beyond that, there is no tangible resistance to this practice from the medical establishment or healthcare authorities.

Now let’s imagine another patient calls in. This patient also has a dry cough scratchy throat, muscle aches, and a low-grade fever. Only this patient had a COVID test kit at home and tested positive. The physician wants to prescribe a medication with no risk of bacterial resistance and a very benign side-effect profile. He’s read lots of literature to suggest it will be helpful. There are a significant number of double-blind studies showing it to be effective in the treatment of SARS Co-V2. It has been used in multiple countries with excellent results. Except, in this case, the physician will find it impossible to prescribe that medication. It will be impossible because that medication is Ivermectin. And somehow it has been removed from the market.

Not only has this FDA-approved, Nobel prize-winning drug been made unavailable, if a physician were to prescribe it, or advocate it as therapy, they are threatened with the potential loss of their medical license, their hospital affiliations, and their board certification.

It gets even more ironic. I’ve noticed that some physicians are prescribing a very common antibiotic called azithromycin for their COVID patients. It is well understood that for COVID-19 when taken alone, it is of no value. There is absolutely no data to show efficacy in COVID-19. It has the same potential problems, as when it is prescribed for other viral infections. Yet the practice goes on, again unimpeded.

Let’s go one step further. Levofloxacin is another antibiotic, introduced in 1996. It was unusual in that it can treat a broad variety of infections, even those that are severe but can be given orally. Because of this, it was overutilized, threatening to create drug resistance.

In 2016, the FDA issued a black box warning because of several severe side effects including tendon rupture, peripheral nerve damage, for them and psychosis. Since then its usage has waned.

The drug was proposed as a treatment for COVID early in the pandemic but proved to have limited antiviral activity.

So I posed this hypothetical to several pharmacist friends: If a physician called in a prescription for azithromycin, or even levofloxacin, and gave the diagnosis of COVID-19, would they fill the prescription? The answer was yes, as there would be nothing to prevent it.  So, in other words, a physician is permitted to prescribe useless antibiotics, even those with serious adverse reactions according to the FDA for COVID-19 infection.

If, as apparently the FDA believes, ivermectin is similarly useless but benign, why is it alone being blocked?

Let’s do some mathematics. As of this writing, there are roughly 890,000 deaths recorded in the United States related to COVID-19. I think most people understand that a lot of these deaths are not due to the virus but from other comorbid conditions. The CDC has long stated that the number of deaths from COVID where there was no comorbid condition (In other words, healthy people who died from COVID) is roughly 7% of the total (65,000). In several meta-analyses, Ivermectin was shown to be roughly 65% effective at preventing serious disease and/or death. So, in the best-case scenario for them, our public health organizations, by suppressing Ivermectin, may be responsible for roughly 40,000 deaths.

In fact, the vast majority of people who actually died from COVID had multiple comorbid conditions, so that number could be much higher.

I need to acknowledge that prescribing antibiotics for viral infections is something that the primary caregivers struggle with. Patients expect them to do something when they’re sick. They don’t appreciate being told to go home and take acetaminophen. Some may never come back and seek care elsewhere.

Yet patients have accepted that exact recipe for dealing with COVID-19, a disease they perceive may actually kill them.

So what’s the difference between prescriptions written for an anti-bacterial, versus Ivermectin, which is an anti-parasitic agent, for a viral infection? Both primarily target infectious agents other than viruses. If anything, even it was futile therapy, Ivermectin is safer than the antibiotics discussed. Yet it is the only medication that has been effectively banned

Given all this, I think it’s easy to suspect that the FDA, the NIH, and the CDC actually understand the potential benefits of Ivermectin and other repurposed drugs. But they also realize that these medications threaten the profits of the pharmaceutical industry with which they are financially entwined.

What makes this even more infuriating is the government’s warm embrace of two new antiviral medications, Pfizer’s Paxlovid, and Merck’s Molnupivinir. These drugs have exactly one company-sponsored study each to vouch for their efficacy. Merck’s drug, by its own testing, is only 39% effective in reducing severe disease and/or death. There are no long-term safety data for either medication.

Yet both have received emergency use authorization, and have suddenly popped up on government-approved treatment protocols.

As I look towards the end of my career, I’ve seen a lot of profit-oriented behavior by pharmaceutical companies. I think of the me-too drugs, molecules that are only slightly different than their now off-patent predecessors aggressively marketed to physicians. I’ve seen pharmaceutical reps actually reimburse physicians for a certain number of prescriptions written for their medications. I’ve seen manipulation of the rules regarding inhaled medications to maintain their patents long after they would have expired.

But if they actively suppressed the adoption of useful medications during a pandemic, then this is beyond the pale. It would suggest a total collapse of any morality or sense of responsibility within the pharmaceutical industry and their partners in the regulatory agencies.

I hope that someday, our investigatory agencies can push past the vast political power these companies have acquired through their burgeoning profits, and find out the truth.