The video is a recent interview with Piers Corbyn of Weather Action making the case for a cooling climate over the next twenty years.  H/T to iceagenow for the link.  I made a loose transcription to express the main points made by Corbyn.

All sides agree there are 50 times more CO2 in the ocean than in the air. The level between them and the saturation level in the atmosphere will be set by the ocean. Warm up the ocean a bit and more gas will come, cool it and more gas will be absorbed. Because oceanic CO2 is 50 times larger, anything man does to atmospheric levels does not matter. If man, or nature, or insects put more CO2 into the air, it will just go into the ocean, depending on the sea temperature. The equilibrium levels will follow Henry’s law of gas solubility.

What we have happening now is the start of a mini ice age. It began starting slowly around 2013, and the move is accelerating. In the immediate you can look at this winter and spring. We have had extreme snow, record low temperatures, all over the Northern Hemisphere.

The main thing is the wild jet stream signifying onset of a mini ice age. Instead of staying in a high north zonal position associated with a warmer world, the jet stream has gotten wavy and descended into mid latitudes and lower, because of minimal solar activity.

North of the jet stream is colder air, and warmer air south of it. Under normal springtime conditions, the jet stream remains well North of the British Isles meaning warmer weather there. However presently the jet stream is both lower and extra wavy, meaning that loops bring cold arctic air over parts of NH. This behavior contradicts global warming theory, but confirms expectations of a mini ice age. 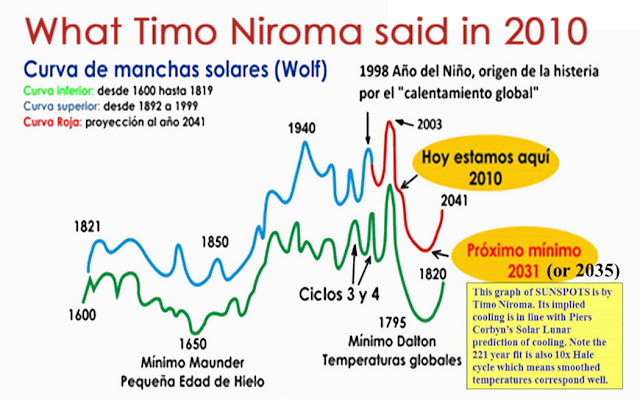 The graph compares average solar activity in the last 200 years with solar activity ten magnetic cycles previous to now. The correlation is impressive. We are at the knee of this curve, plus or minus three or four years. If the correlation holds, we are plunging into a mini ice age. So for the next two decades until about 2035 it will get cooler and cooler on average and there will more wild jet streams and weather. Growing seasons will be shorter and crop failures more frequent, resulting in economic difficulties.

The basic message is that the sun is controlling the climate, primarily by the sea. “The best thing to do now is to tell your politicians to stop believing nonsense, and to stop doing silly measures like the bird-killing machines of wind farms in order to save the planet (they say), but get rid of all those things, which cost money, and reduce electricity prices now.”

This winter and spring are inconsistent with global warming assumed to result from CO2.  The wild jet stream (polar vortex) bringing these conditions does fit with solar activity fluxes.  If the correlation holds, the planet will cool not warm.  Governments would serve their citizens by shifting priorities from controlling emissions to ensuring robust infrastructure and reliable, affordable energy.