Ronald Bailey writes at Reason The New York Times Says Heat Waves Are Getting Worse. The National Climate Assessment Disagrees.  Excerpts in italics with my bolds.

Americans east of the Rockies are sweltering as daytime temperatures soar toward 100 degrees or more. It is now customary for journalists covering big weather events to speculate on how man-made climate change may be affecting them, and the current heat wave is no exception. Take this headline in The New York Times: “Heat Waves in the Age of Climate Change: Longer, More Frequent and More Dangerous.”

As evidence, the Times cites the U.S. Global Change Research Program, reporting that “since the 1960s the average number of heat waves—defined as two or more consecutive days where daily lows exceeded historical July and August temperatures—in 50 major American cities has tripled.” That is indeed what the numbers show. But it seems odd to highlight the trend in daily low temperatures rather than daily high temperatures.

Here, from the report, are the “observed changes in the coldest and warmest daily temperatures (°F) of the year for each National Climate Assessment region in the contiguous United States.” The “changes,” it explains, “are the difference between the average for present-day (1986–2016) and the average for the first half of the last century (1901–1960).” 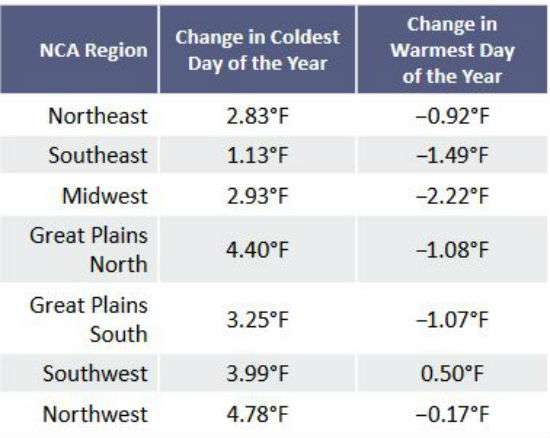 And here is the Heat Wave Magnitude Index, which shows the maximum magnitude of a year’s heat waves. (The report defines a heat wave as a period of at least three consecutive days where the maximum temperature is above the appropriate threshold.) 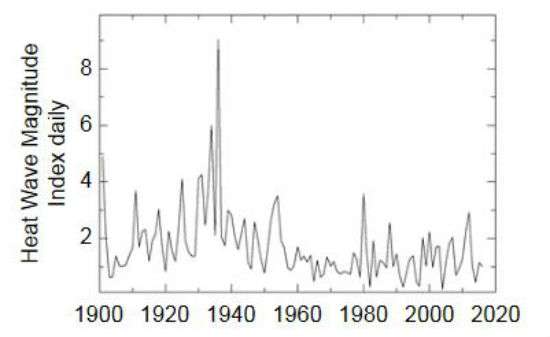 The maps below, from the Fourth Assessment, illustrate the trends in the warmest (generally daytime) and coldest (generally nighttime) temperatures in the contiguous U.S.: 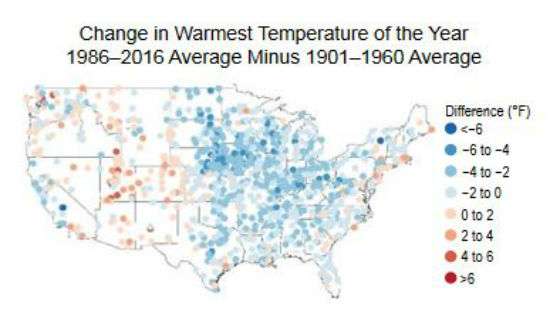 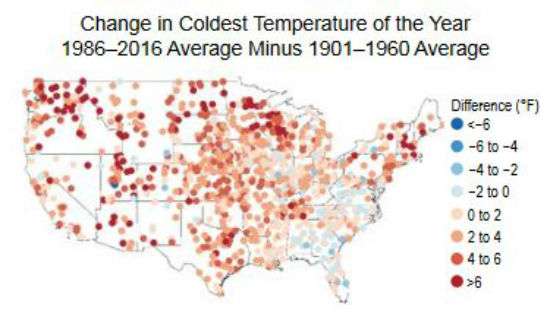 According to the Intergovernmental Panel on Climate Change, climate models tend to significantly underestimate the decrease in the diurnal temperature range—that is, the difference between minimum and maximum daily temperatures—over the last 50 years. The panel’s latest report notes that there is “medium confidence” that “the length and frequency of warm spells, including heat waves, has increased since the middle of the 20th century” around the world. Medium confidence means there is about a 50 percent chance of the finding being correct. (The report does deem it “likely that heatwave frequency has increased during this period in large parts of Europe, Asia and Australia.”)

Big tip of the hat to the University of Colorado’s invaluable Roger Pielke Jr.

Footnote: Since June 2019 was only the 24th warmest in the US, alarmists will be playing catch up this summer.  A previous post explains how to mine the data to produce the bias you want from the billions of measurements recorded. Clear Thinking about Heat Records