Donna Laframboise writes at Big Picture News About Marcel Crok’s Climate Adventures. Marcel himself explains at this blog My flagged Tedx talk about climate change. Excerpts in italics with my bolds

Recently I gave my first Tedx talk during Tedx Roermond. Roermond is a city in the south of The Netherlands. The experience was quite interesting. The motto of Ted is “ideas worth spreading”. Apparently not all ideas are worth spreading, because soon after the organisation of Tedx Roermond sent my name and a short description of my ideas to the TED headquarters they received a rather threatening email back that the ultimate consequence could be that they would lose their Tedx license. Kudos to the organisation of Tedx Roermond that they persisted in scheduling my talk and also in uploading it.

The talk is online, however with the following note from TED:

“NOTE FROM TED: We’ve flagged this talk, which was filmed at a TEDx event, because it appears to fall outside TEDx’s curatorial guidelines.The sweeping claims and assertions made in this talk regarding climate change only represent the views of the speaker and are not corroborated by scientific evidence.”

This – “The sweeping claims” – is all rather amusing.

In preparing my talk I wrote down what I wanted to say. That version (not a transcript) differs of course from the final talk I gave in Roermond. The talk is meant to be understandable for a broad audience. Below is the written version of my talk.

Tedx speakers are not allowed to be given a speaking fee, so you have to do all the preparation in your own time. If people appreciate the talk they might consider using the donation button. Thanks!

I encourage you to go read the whole presentation. Some of his key points are excerpted below.

I studied chemistry, I then decided to become a science journalist. Late 2004 the editor in chief of the popular science magazine I worked for asked me to look into the famous hockey stick graph.

I did what science journalists do in such a case, I delved into the story. Two Canadians, both ‘outsiders’, had done a lot of audit work on the graph and I decided to contact them. Their story was fascinating and after two years of struggling they found out what was wrong with the graph. They discovered there was a crucial error in the statistics. As a result, even if you used computer generated noise, the hockey stick curve would appear.

They published this in a scientific paper and I had the scoop of their work in the media. We translated the article and published it both in our own magazine Natuurwetenschap & Techniek as in the Canadian newspaper the Financial Post.

It was my first article on climate change ever and right away I was in the middle of not only the Dutch climate debate but even the international debate. The article won an award, but I was also criticized, by KNMI for example, who said publicly my article was “nonsense”. I was also immediately branded as a “climate sceptic”, even by fellow science journalists.

The arguments of the critics were not difficult to refute and the work of the two Canadians stands firmly to this day. I was intrigued by the quite aggressive and also defensive reaction of the climate scientists. Up to this day the criticism of the Canadians has never been fully addressed by the climate science community or the IPCC. Wasn’t this about the progress of science?

I think if climate scientists in The Netherlands and abroad had accepted the criticism of the two Canadians and had corrected their graph, I would have moved on to other topics. But now I became really fascinated and also persistent. If climate change is supposed to be so important, but the science seems to lack self-correction, what about other claims in the climate debate? I decided to quit my job and work fulltime on the climate issue and I have done so ever since.

A broken hockey stick graph doesn’t mean that global warming can’t be a problem. So, let’s look at the evidence.

Now comes the hard part. Correlation doesn’t prove causation. How do we know that the increase in CO2 caused the recent warming? Well, we don’t know. It’s fair to say that the IPCC claims it is most likely that all the warming is caused by greenhouse gases. But there is no way to prove this in a way you prove Newton’s law for example.

The IPCC feels pretty certain – they call it extremely likely – that most of the warming since 1950 is caused by CO2 and other greenhouse gases. The evidence for this claim comes mainly from simulations with climate models. Climate models are huge computer programs that try to simulate the whole climate. It’s quite an accomplishment of the science community, and IPCC nowadays uses the results of around 30 models. These model simulations show that if you don’t use greenhouse gases, the models can’t replicate the warming since the mid seventies till now. The models, represented by the thick red line, are not able to replicate this early warming that was of about the same magnitude as the warming between 1975 and 2000. So the same models that are used to ‘prove’ that humans caused the recent warming fail to reproduce a warming period earlier in the century. This of course weakens the evidence.

What is going on here? There still is no clear explanation for the early warming period and IPCC reports say very little about it. A logical candidate is what scientists call the Atlantic Multidecadal Oscillation , the AMO. It’s a quasi-periodic warming and cooling phase of the Atlantic Ocean that influences global temperature. The AMO’s influence is evident in the pattern of global temperature changes. So, it contributes to the warming in both the early and the late warming periods. However, climate models are unable to capture this behaviour. And scientists are still uncertain what causes the AMO.

Now here is what according to me has happened. The climate modellers of course try to replicate historical changes in the Earth’s global temperature because this has become the main indicator for global warming and is a key measure used to judge their models. They manage to simulate both the recent warming and the lack of warming in the middle of last century with a combination of greenhouse gases and aerosols, which are air pollutants. However, both the mid-century flat temperature and the late century warming were partly caused by natural oscillations of the climate system. So, the models more or less replicated the post-1950 global temperature record, but for the wrong reasons.

Over the last few years the evidence for models being oversensitive has been piling up. Only in this decade has the increase in temperature and greenhouse gases since about 1850 become large enough, and the understanding of the influence of aerosols sufficiently good, to estimate with any confidence the sensitivity of the climate based on observations. Now if we have to summarize the global climate debate in one graph, it could be this one. Mainstream climate scientists don’t like it and try to explain away the differences it shows. Sceptics see it as evidence the models are ‘oversensitive’, that means, overestimating the warming effect of CO2.

The main conclusion from these so-called observational estimates, and I share those, is that observations indicate a much less sensitive climate than the climate models. This is really good news. It means we will get considerably less warming in the future even if CO2 emissions will continue to rise, which is to be expected, since large parts of the world are still developing their economies and cannot do that without fossil fuels.

Extremes
Another topic of great societal importance is the occurrence of extremes. That the climate is getting more extreme, is a message we hear almost on a daily basis in the media. But is this so? It might surprise you but for the most consequential extremes in terms of damage and victims, the answer is a clear no. Hurricanes, floods and droughts have not gotten worse because of climate change.

Sea level
For us in Holland, sea level has always been a huge topic. We have experienced terrible floods in the past, for example in 1421, when the Saint Elisabeth floods killed an estimated 10,000 people. More recently of course we all remember the floods in Sealand in 1953 which killed almost 2,000 people. The sea level has been rising for the last 150 years or so, both globally and along our coast, but the rise has been remarkably steady throughout this period.

Greening
The last thing I want to mention is the greening of the earth. . What are you saying? Yes, the earth is getting greener and indeed, CO2 is causing this. After all, as you all know, CO2 is plant food, so more CO2 in the air means plants are growing faster and better. This also applies to food production. Last week Dutch climate economist Richard Tol said in newspaper De Telegraaf that for this reason climate change so far has probably been beneficial.

Society
Now what does this all mean for our personal life? People might be surprised to learn that I live as “green” as one could possibly live. I never had a car, I do everything by bike in Amsterdam. I came here by train. My daughter is the first junior bicycle mayor in the world. But is this because of climate change? No. This is just the lifestyle I like given my circumstances, I live in the centre of Amsterdam.

But there is no need to feel guilty if one owns a car.

Unfortunately, the positive view on the climate issue that I told you today is totally absent in government circles. You could say that climate negotiators live in a parallel universe that is built on the climate models. Perhaps this is the key element for fathoming the discrepancy between the virtual world of unrealistic models and the world you and I live in.

We as human beings should take care of our world in a meaningful way. This is a daily process that we need to figure out here and now, one step at a time. The envisioned grand and utopian future as modelled for us, not with us, spawns a dystopian threat we all know too well from the 20th century.

Politicians often think they can engineer society. Our current political leaders now even believe they can manage the climate. This is a dangerous utopian vision for which the bill is handed over to the citizens.

Marcel Crok’s story is compelling because he did the work to investigate and apply his critical intelligence.  Presumably all TED presenters are expressing their own conclusions supported by the evidence they have found.  So why does TED think it necessary to warn people away from his findings, and claim that his supporting evidence is somehow invalid?  It can only be that that a narrative of “climate emergency” is favored by that organization, and contrary views are unacceptable.  Marcel Crok has bravely followed the evidence and his conscience and must be heard. 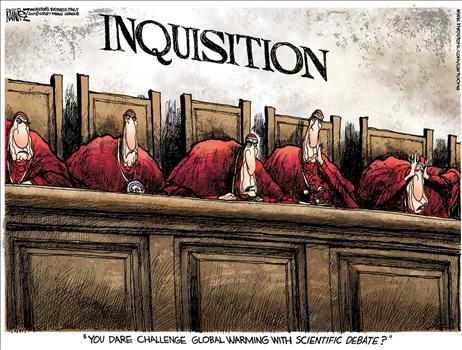 See Also: Going Dutch: How Not to Cut Emissions

Rise and Fall of the Modern Warming Spike