As Chuck Devore explains at Forbes, Mother Nature has always burned California, but the state government is failing to manage the landscape while blaming the fires on Climate Change.  His article is With Or Without Climate Change, California Will Burn, The Only Question Is: How Much?  Excerpts in italics with my bolds.

California is blessed—and cursed—with a Mediterranean climate. The Golden State features long stretches of dry, low-humidity weather, with infrequent thunderstorms (except in its desert regions). Most of the state’s precipitation falls during the winter months. Before the first big late-year Pacific storm, California’s forests and coastal chaparral are often tinder-dry.

Richard Henry Dana Jr., in his book “Two Years Before the Mast” published in 1840, described the area around Los Angeles thus:

“The only thing which diminishes its beauty is, that the hills have no large trees upon them, they having been all burnt by a great fire which swept them off about a dozen years before, and they had not yet grown up again. The fire was described to me by an inhabitant, as having been a very terrible and magnificent sight. The air of the whole valley was so heated that the people were obliged to leave the town and take up their quarters for several days upon the beach.”

Today, of course, politicians blame climate change for the wildfires and the electrical blackouts aimed at preventing more fires, with Democratic Gov. Gavin Newsom on Friday declaring that “It’s more than just climate change. It’s about the failure of capitalism to address climate change.”

There are two things to unpack here: the climate change claim and the failure of capitalism claim.

California is seeing larger wildfires. But this was predicted 13 years ago by the Western Governors’ Association in their Biomass Task Force Report:

What isn’t harvested and cleaned up in a controlled, predictable manner is burned up in a chaotic manner—the only thing predictable about it is that it will certainly burn, sooner or later.

As for the failure of capitalism, California’s publicly regulated utilities are hardly examples of unfettered free markets. Rather, they do exactly what the regulators appointed by the elected officials tell them to do. 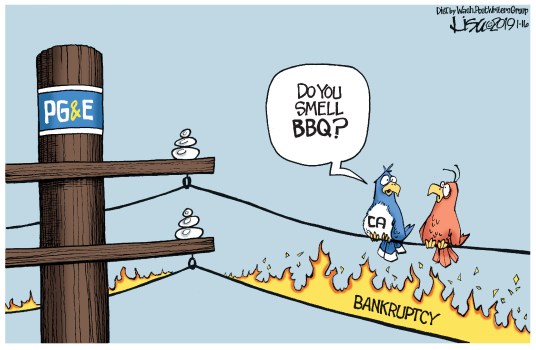 Those politicians and regulators have told the utilities to dramatically boost wind and solar power—and they have. In 2012, PG&E asked regulators for a $4.84 billion electric rate hike to pay for powerline maintenance and upgrades. Regulators, worried over electrical prices that were already close to the nation’s highest, rejected the request, and eventually approved less than half that amount.

One can’t help but to wonder—if this rate hike were approved in 2012, might it have prevented 2018’s deadly Camp Fire, which started almost a year ago and killed 85 people while destroying nearly 19,000 homes, businesses and other buildings? The fire was blamed on a nearly-100-year-old power line that should have been replaced 25 years ago.

Now, PG&E—in bankruptcy to shield itself from $30 billion in fire liabilities and under heavy criticism—is preventatively cutting the power on high-risk powerlines during periods of heavy winds.

These blackouts—the largest two hitting about 2 million people each time for a couple of days—have cost California businesses and consumers an estimated $5 billion in lost economic activity. As much as the requested rate hike might have cost had it been approved seven years ago.

As PG&E tries to catch up for years of neglect in trimming trees away from some 2,500 miles of high-priority powerlines, they’re running into another problem: They can’t find the experienced work crews. This is because employment in the timber industry is half of what it was 20 years ago due to decades of federal and state environmental policies that have cut the Western region timber harvest in half.

Whether or not climate change is making California’s deadly outbreak of fire worse, the solution is the same—California must significantly ramp up forest management, which, if done in concert with increased logging, will be less costly to the taxpayer. At the same time, it must aggressively increase the use of proscribed burns, both in the north and in Southern California’s coastal chaparral. President Trump said as much last year, to great hoots of derision from California’s politicians and environmentalists.

California has slowly taken steps in this direction, in the last year of Democratic Gov. Jerry Brown’s four terms in office and now Democratic Gov. Gavin Newsom’s first year. But it is likely too little, too late. That has led PG&E CEO Bill Johnson to warn state regulators that blackouts could last another 10 years.