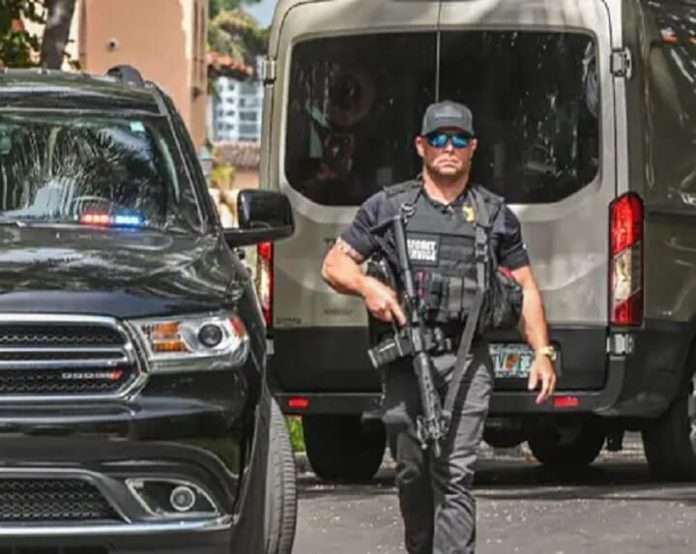 Lots we don’t know and may never know, but one explanation is the most plausible, considering all the blowback DOJ will unsurprisingly take in coming weeks (months?).  I am invoking the principle that high risks are taken only when high rewards can be gained.  So what was at stake in this extremely high risk action?  I suspect that despite all the hype and spin you will see and hear, this was mainly about FBI and DOJ doing damage control in their own interests.  My theory is that Trump has/had documents proving criminal behavior by the FBI, aided and abetted by DOJ.  The raid was not so much to seize exonerating evidence, but rather to seize evidence whose disappearance will let the perpetrators off the hook.

Conservative Patriots explain this theory in their article  FBI “Had Personal Stake” in Mar-A-Lago Raid.  Excerpts in italics with my bolds.

The highly suspicious FBI raid on President Donald J. Trump’s Florida home, Mar-a-Lago, exposes some long-anticipated details about the country’s top law enforcement agency that show the FBI is a danger to freedom and liberty.

Reports from Wednesday set the tone for exposing the FBI’s real motives for the raid on Trump, reminding readers about Trump’s declassification of a binder of documents on January 19th, 2021, which contains hundreds of pages about the Crossfire Hurricane scandal and the Russia hoax.

“The DOJ had already made redactions to protect sources & methods, and returned the binder back to the White House. But the corrupt FBI also wanted to hide names. So at the last minute, the DOJ demanded the binder comply with the 1974 Privacy Act. The Act requires any “agency” that releases records to also hide personal or identifiable name information. The DOJ knew this Act doesn’t apply to the White House, it was a stall tactic. The courts decided this 22 years ago that the Privacy Act was based around FOIA requests, and the White House is not an agency,” Hoft reported. 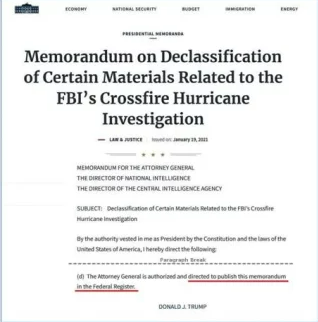 By the authority vested in me as President by the Constitution and the laws of the United States of America, I hereby direct the following:

Section 1. Declassification and Release. At my request, on December 30, 2020, the Department of Justice provided the White House with a binder of materials related to the Federal Bureau of Investigation’s Crossfire Hurricane investigation. Portions of the documents in the binder have remained classified and have not been released to the Congress or the public. I requested the documents so that a declassification review could be performed and so I could determine to what extent materials in the binder should be released in unclassified form.

I hereby declassify the remaining materials in the binder. This is my final determination under the declassification review and I have directed the Attorney General to implement the redactions proposed in the FBI’s January 17 submission and return to the White House an appropriately redacted copy.

My decision to declassify materials within the binder is subject to the limits identified above and does not extend to materials that must be protected from disclosure pursuant to orders of the Foreign Intelligence Surveillance Court and does not require the disclosure of certain personally identifiable information or any other materials that must be protected from disclosure under applicable law. Accordingly, at my direction, the Attorney General has conducted an appropriate review to ensure that materials provided in the binder may be disclosed by the White House in accordance with applicable law.

Meadows knew better than to rely on the DOJ to release this damaging binder after they left the White House. He should have released the binder to the public himself. But in doing so, there was a chance he would become a target of the DOJ and FBI.

In Support of this Suspicion

“DEVELOPING: Sources say the FBI agents and officials who were involved in the raid on former President Trump’s home work in the same CounterIntelligence Division of the FBI that investigated Trump in the Russiagate hoax and are actively under criminal investigation by Special Counsel John Durham for potentially abusing their power investigating Trump in the Russian fraud and therefore have a potential conflict of interest and should have been RECUSED from participating in this supposed “espionage” investigation at Mar-a-Lago.”