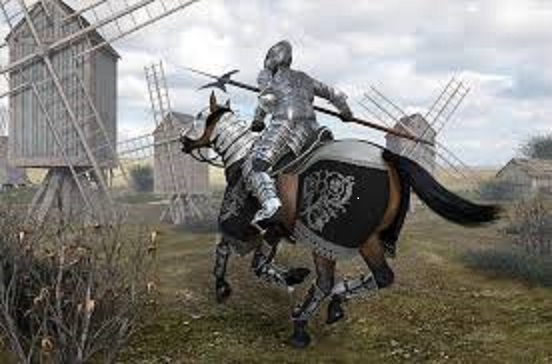 Don Quixote ( “don key-ho-tee” ) in Cervantes’ famous novel charged at some windmills claiming they were enemies, and is celebrated in the English language by two idioms:

It is clear that climateers are similary engaged in some kind of heroic quest, like modern-day Don Quixotes. The only differences: They imagine a trace gas in the air is the enemy, and that windmills are our saviours.

Why the Quest to Mitigate Global Warming is Quixotic

Roger Andrews at Energy Matters puts into context the whole mission to reduce carbon emissions. You only have to look at the G20 countries, who have 64% of the global population and use 80% of the world’s energy. The introduction to his essay, Electricity and energy in the G20:

While governments fixate on cutting emissions from the electricity sector, the larger problem of cutting emissions from the non-electricity sector is generally ignored. In this post I present data from the G20 countries, which between them consume 80% of the world’s energy, summarizing the present situation. The results show that the G20 countries obtain only 41.5% of their total energy from electricity and the remaining 58.5% dominantly from oil, coal and gas consumed in the non-electric sector (transportation, industrial processes, heating etc). So even if they eventually succeed in obtaining all their electricity from low-carbon sources they would still be getting more than half their energy from high-carbon sources if no progress is made in decarbonizing their non-electric sectors.

The whole article is enlightening, and shows how much our civilization depends on fossil fuels, even when other sources are employed. The final graph is powerful (thermal refers to burning of fossil fuels): Figure 12: Figure 9 with Y-scale expanded to 100% and thermal generation included, illustrating the magnitude of the problem the G20 countries still face in decarbonizing their energy sectors.

The requirement is ultimately to replace the red-shaded bars with shades of dark blue, light blue or green – presumably dominantly light blue because nuclear is presently the only practicable solution.

There is another way. Adaptation means accepting the time-honored wisdom that weather and climates change in ways beyond our control. The future will have periods both cooler and warmer than the present and we must prepare for both contingencies. Colder conditions are the greater threat to human health and prosperity.  The key priorities are robust infrastructures and reliable, affordable energy.

This video shows Don Quixote might have more success against modern windmills.