Norman Rogers writes at American Thinker What It Will Take for the Wind and Solar Industries to Collapse. Excerpts in italics with my bolds.

The solar electricity industry is dependent on federal government subsidies for building new capacity. The subsidy consists of a 30% tax credit and the use of a tax scheme called tax equity finance. These subsidies are delivered during the first five years.

For wind, there is subsidy during the first five to ten years resulting from tax equity finance. There is also a production subsidy that lasts for the first ten years.

The other subsidy for wind and solar, not often characterized as a subsidy, is state renewable portfolio laws, or quotas, that require that an increasing portion of a state’s electricity come from renewable sources. Those state mandates result in wind and solar electricity being sold via profitable 25-year power purchase contracts. The buyer is generally a utility with good credit. The utilities are forced to offer these terms in order to cause sufficient supply to emerge to satisfy the renewable energy quotas.

The rate of return from a wind or solar investment can be low and credit terms favorable because the investors see the 25-year contract by a creditworthy utility as a guarantee of a low risk of default. If the risk were to be perceived as higher, then a higher rate of return and a higher interest rate on loans would be demanded. That in turn would increase the price of the electricity generated.

The bankruptcy of PG&E, the largest California utility, has created some cracks in the façade. A bankruptcy judge has ruled that cancellation of up to $40 billion in long-term energy contracts is a possibility. These contracts are not essential or needed to preserve the supply of electricity because they are mostly for wind or solar electricity supply that varies with the weather and can’t be counted on. As a consequence, there has to exist and does exist the necessary infrastructure to supply the electricity needs without the wind or solar energy.

Probably the judge will be overruled for political reasons, or the state will step in with a bailout. Utilities have to keep operating, no matter what. Ditching wind and solar contracts would make California politicians look foolish because they have long touted wind and solar as the future of energy.

PG&E is in bankruptcy because California applies strict liability for damages from forest fires started by electric lines, no matter who is really at fault. Almost certainly the government is at fault for not anticipating the danger of massive fires and for not enforcing strict fire prevention and protection. Massive fire damage should be protected by insurance, not by the utility, even if the fire was started by a power line. The fire in question could just as well have been started by lightning or a homeless person. PG&E previously filed bankruptcy in 2001, also a consequence of abuse of the utility by the state government.

By far the most important subsidy is the renewable portfolio laws. Even if the federal subsidies are reduced, the quota for renewable energy will force price increases to keep the renewable energy industry in business, because it has to stay in business to supply energy to meet the quota. Other plausible methods of meeting the quota have been outlawed by the industry’s friends in the state governments. Nuclear and hydro, neither of which generates CO2 emissions, are not allowed. Hydro is not strictly prohibited — only hydro that involves dams and diversions. That is very close to all hydro. Another reason hydro is banned is that environmental groups don’t like dams.

For technical reasons, an electrical grid cannot run on wind or solar much more than 50% of the time. The fleet of backup plants must be online to provide adjustable output to compensate for erratic variations in wind or solar. Output has to be ramped up to meet early-evening peaks. Wind suffers from a cube power law, meaning that if the wind drops by 10%, the electricity drops by 30%. Solar suffers from too much generation in the middle of the day and not enough generation to meet early evening peaks in consumption.

When a “too much generation” situation happens, the wind or solar has to be curtailed. That means that the operators are told to stop delivering electricity. In many cases, they are not paid for the electricity they could have delivered. Some contracts require that they be paid according to a model that figures out how much they could have generated according to the recorded weather conditions. The more wind and solar, the more curtailments as the amount of erratic electricity approaches the allowable limits. Curtailment is an increasing threat, as quotas increase, to the financial health of wind and solar.

There is a movement to include batteries with solar installations to move excessive middle-of-the-day generation to the early evening. This is a palliative to extend the time before solar runs into the curtailment wall. The batteries are extremely expensive and wear out every five years.

Neither wind nor solar is competitive without subsidies. If the subsidies and quotas were taken away, no wind or solar operation outside very special situations would be built. Further, the existing installations would continue only as long as their contracts are honored and they are cash flow–positive. In order to be competitive, without subsidies, wind or solar would have to supply electricity for less than $20 per megawatt-hour, the marginal cost of generating the electricity with gas or coal. Only the marginal cost counts, because the fossil fuel plants have to be there whether or not there is wind or solar. Without the subsidies, quotas, and 25-year contracts, wind or solar would have to get about $100 per megawatt-hour for its electricity. That gap, between $100 and $20, is a wide chasm only bridged by subsidies and mandates.

The cost of using wind and solar for reducing CO2 emissions is very high. The most authoritative and sincere promoters of global warming loudly advocate using nuclear, a source that is not erratic, does not emit CO2 or pollution, and uses the cheapest fuel. One can buy carbon offsets for 10 or 20 times less than the cost of reducing CO2 emissions with wind or solar. A carbon offset is a scheme where the buyer pays the seller to reduce world emissions of CO2. This is done in a variety of ways by the sellers.

The special situations where wind and solar can be competitive are remote locations using imported oil to generate electricity. In those situations, the marginal cost of the electricity may be $200 per megawatt-hour or more. Newfoundland comes to mind — for wind, not solar.

Maintenance costs for solar are low. For wind, maintenance costs are high, and major components, such as propeller blades and gearboxes, may fail, especially as the turbines age. These heavy and awkward objects are located hundreds of feet above ground. There exists a danger that wind farms will fail once the inflation-protected subsidy of $24 per megawatt-hour runs out after ten years. At that point, turbines that need expensive repairs may be abandoned. Wind turbine graveyards from the first wind fad in the 1970s can be seen near Palm Springs, California. Wind farms can’t receive the production subsidy unless they can sell the electricity. That has resulted paying customers to “buy” the electricity. 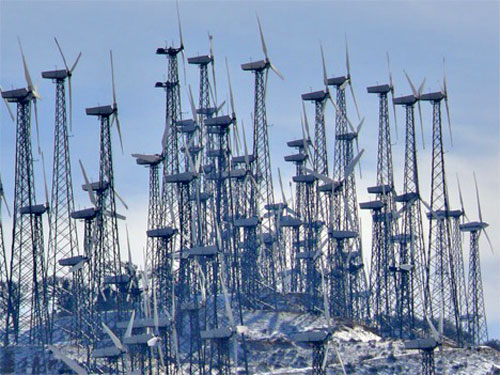 The conservative investors who make long-term investments in wind or solar may be underestimating the risks involved. For example, an article in Chief Investment Officer magazine stated that CalPERS, the giant California public employees retirement fund, is planning to expand investments in renewable energy, characterized as “stable cash flowing assets.” That article was written before the bankruptcy of PG&E. The article also stated that competition among institutional investors for top yielding investments in the alternative energy space is fierce.

Wind and solar are not competitive and never will be. They have been pumped up into supposedly solid investments by means of ill advised subsidies and mandates. At some point, the governments will wake up to the waste and foolishness involved. At that point, the value of these investments will collapse. It won’t be the first time that investment experts made bad investments because they don’t really understand what is going on.

Footnote:  There is also a report from GWPF on environmental degradation from industrial scale wind and solar: