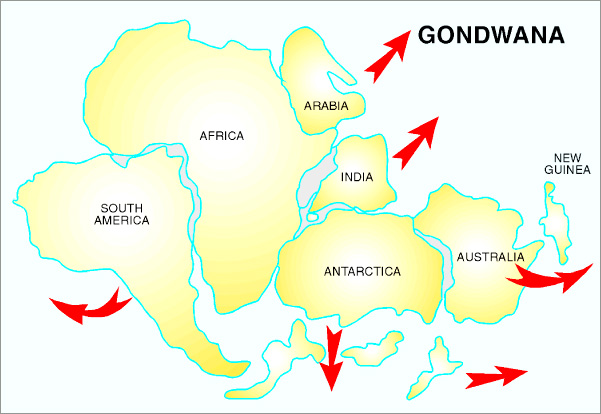 The supercontinent Gondwana hundreds of million years ago at its primary stages, and the directions pieces drifted away

That question is the title of Ian Plimer’s Spectator Australia article What Climate Crisis? Excerpts in italics with my bolds and added images.

For more than 80 per cent of time, Earth has been a warm wet greenhouse planet with no ice. We live in unusual times, when ice occurs on continents. This did not happen overnight. The great southern continent, Gondwanaland, formed about 550 million years ago. It occupied 20 per cent of the area of our planet and included Antarctica, South America, Australia, South Africa and the Indian subcontinent.

Gondwanaland was covered by ice when it drifted across the South Pole 360-255 million years ago. Evidence for this ice age is in the black coal districts of Australia, South Africa and India.

If Antarctica is to lose its ice sheets to end the current ice age, plate tectonics must move the continent northwards or fragment Antarctica into smaller land masses. Parts of Antarctica are currently being fragmented which is why there are more than 150 hot spots and volcanoes in rift valleys beneath Antarctic ice. Plate tectonics must also widen the Bering Strait to allow more warm Pacific Ocean water to enter and warm the Arctic.

Arctic ice formed 2.5 million years ago when plate tectonic-driven volcanoes in central America joined North America to South America and stopped Pacific and Atlantic Ocean waters from mixing. This was exacerbated by a supernova explosion that bombarded Earth with cosmic particles to produce cloudiness and cooling. 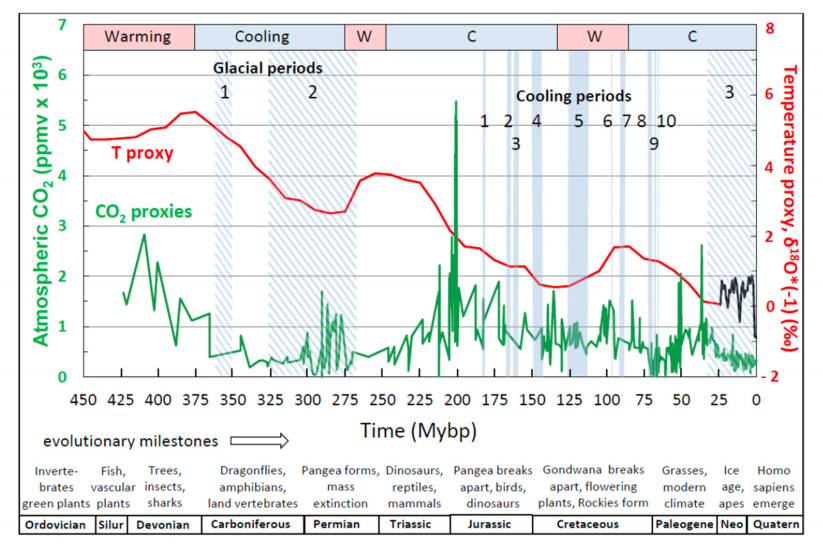 The Earth has been slowly cooling for the last 50 million years from times when life thrived and rapidly diversified. In these warmer times, there were no mass extinctions due to natural warming and, if the planet is warming today, the past shows us that life will thrive and diversify even more. 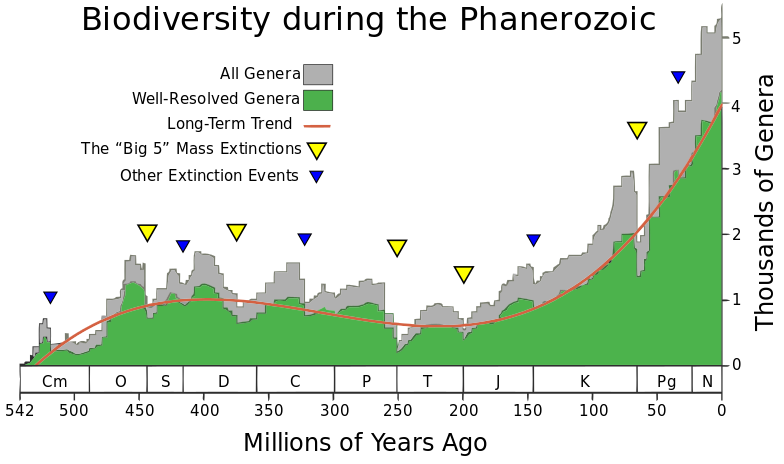 Once the Antarctic ice formed, ice sheets waxed and waned depending on whether Earth was closer or more distant from the Sun. Within these cycles there were smaller cycles driven by variations in energy emitted from the Sun producing many short warm spikes during long glaciations and very short cold spikes during short interglacials with average temperature rises and falls of more than 10°C a decade.

If governments, the UN or climate activists want to stop the normal planetary process
of climate change, then they need to stop plate tectonics,
stop variations in the Earth’s orbit and stop variations in solar output.

Even the omnipotent, omnipresent Kevin Rudd couldn’t manage this!

Six of the six most recent ice ages were initiated when the Earth’s atmospheric carbon dioxide was far higher than at present. Atmospheric temperature rise occurs before the carbon dioxide content of the atmosphere rises. It has never been proven that human emissions of carbon dioxide drive global warming despite numerous requests to climate activist scientists for the published evidence. Trillion-dollar bankrupting decisions on energy policy are being made using invalid science. 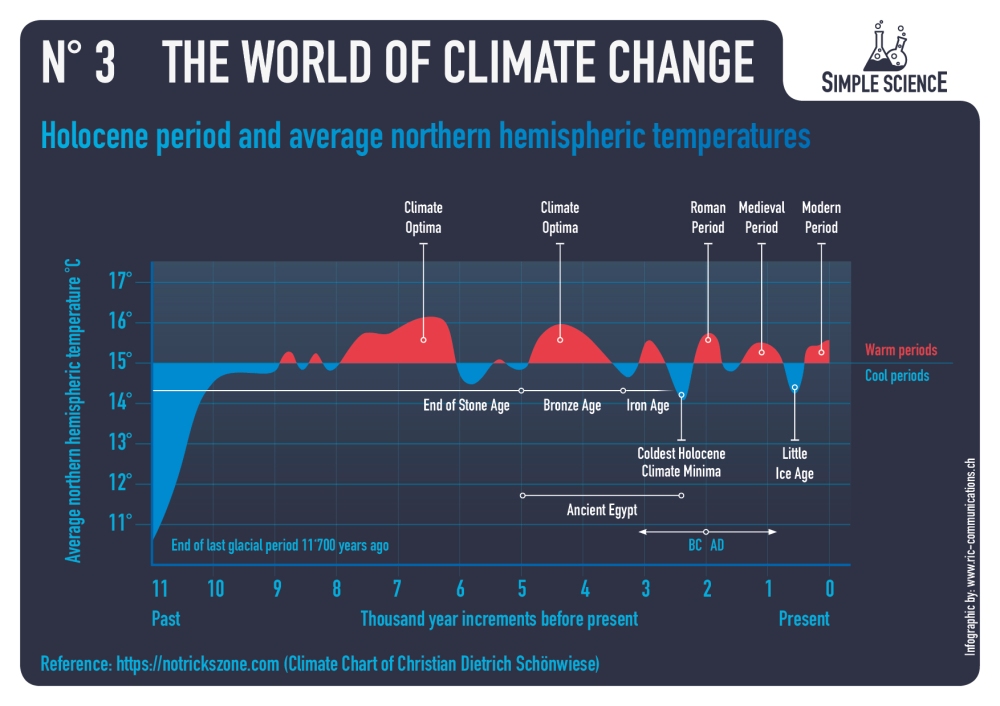 The peak of the last orbitally-driven interglacial was 7,000 to 4,000 years ago and for the last 4,000 years the Earth has been cooling as the climate changes from an interglacial into glaciation. There were solar-driven warm spikes such as the Minoan Warming, Roman Warming, Medieval Warming and the Modern Warming and cold spikes (e.g. Dark Ages, Little Ice Age) during this 4,000-year cooling trend.

In 2020, we entered the Grand Solar Minimum which is calculated to end in 2053. Whether there will be a solar-driven cooling, similar to the Little Ice Age (1300-1850 AD), or a full-blown orbitally-driven glaciation, such as the last glaciation from 116,000-14,400 years ago, is unknown. The former cooling could last for hundreds of years whereas the latter would last for at least 90,000 years. If there was another period of sustained subaerial volcanism, cooling would be accelerated. 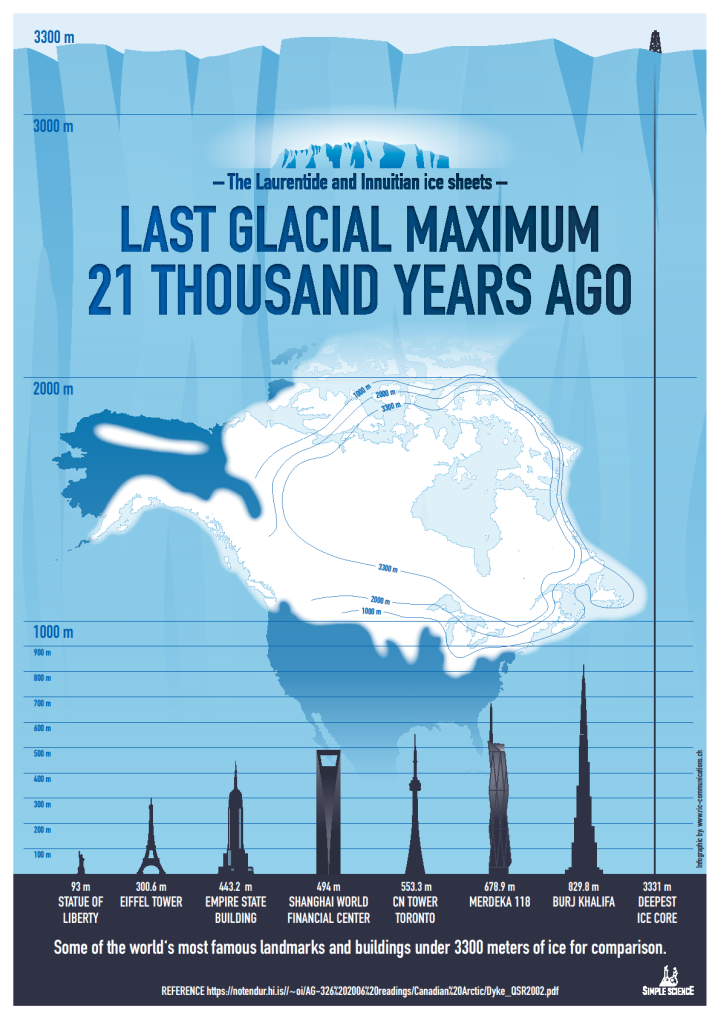 In the last glaciation, vegetation contracted and tropical areas such as the Amazon Basin only had copses of trees occupying some ten per cent of the area of the current Amazonian rainforests; large areas of inland Australia, China, India, USA and Africa were covered by sand deposited from cold dry cyclonic winds; inland lakes evaporated; sea level was 130 metres lower than at present; there was no Great Barrier Reef; sea ice isolated Greenland, Iceland, northern Russia and northern Canada; Antarctic sea ice extended hundreds of kilometres north and there was a reduction in rainfall and plant and animal species. Areas that now support pastoral and grain-growing activities were sandy wastelands during the last glaciation.

Humans struggled as hunter-gatherers around the edge of ice sheets and at lower latitudes.

We are putting all our efforts and wasting trillions of taxpayers’ dollars into trying to prevent mythical human-induced global warming, yet we still don’t prepare for the inevitable annual floods, droughts and bushfires, let alone longer-term solar – and orbitally – driven global cooling.

We have a crisis of single-minded stupidity exacerbated by a dumbed-down education system supported by incessant propaganda, driven by financial interests and political activist authoritarianism.