August 2016 was the final report of the Sea Ice Prediction Network (SIPN) before the actual September monthly extent is reported by NOAA Sea Ice Index (SII). The report (here) gave this overview: 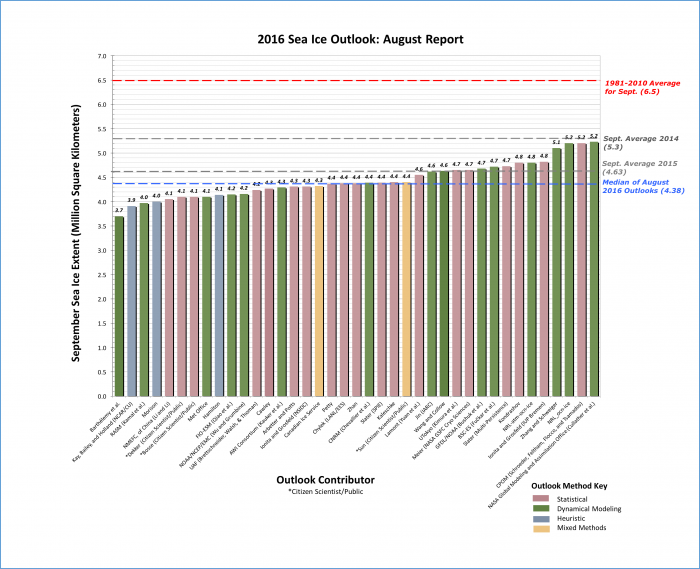 This month the median pan-Arctic extent Outlook for September 2016 sea ice extent is 4.4 million square kilometers (km2) with quartiles of 4.2 and 4.7 million km2, which is slightly higher than July’s value (4.3 million km2) (See Figure 1 in the full report, below). If the median Outlook should agree with the observed estimate come September, this year would be the third lowest September in the satellite record. The spread in the Outlook contributions narrowed slightly from July to August, with an overall range this month of 3.7 to 5.2 million km2.

The chart shows the September monthly sea ice extents from NOAA and MASIE. Both datasets show 4.5 M km2, above what was predicted, about 200k km2 higher than 2007.

Some had anticipated a late Arctic cyclone might again produce a lower number, as it did in 2012. But as the chart shows, 2012 is looking increasingly like an outlier, interrupting a steady recovery of ice extents since 2007.