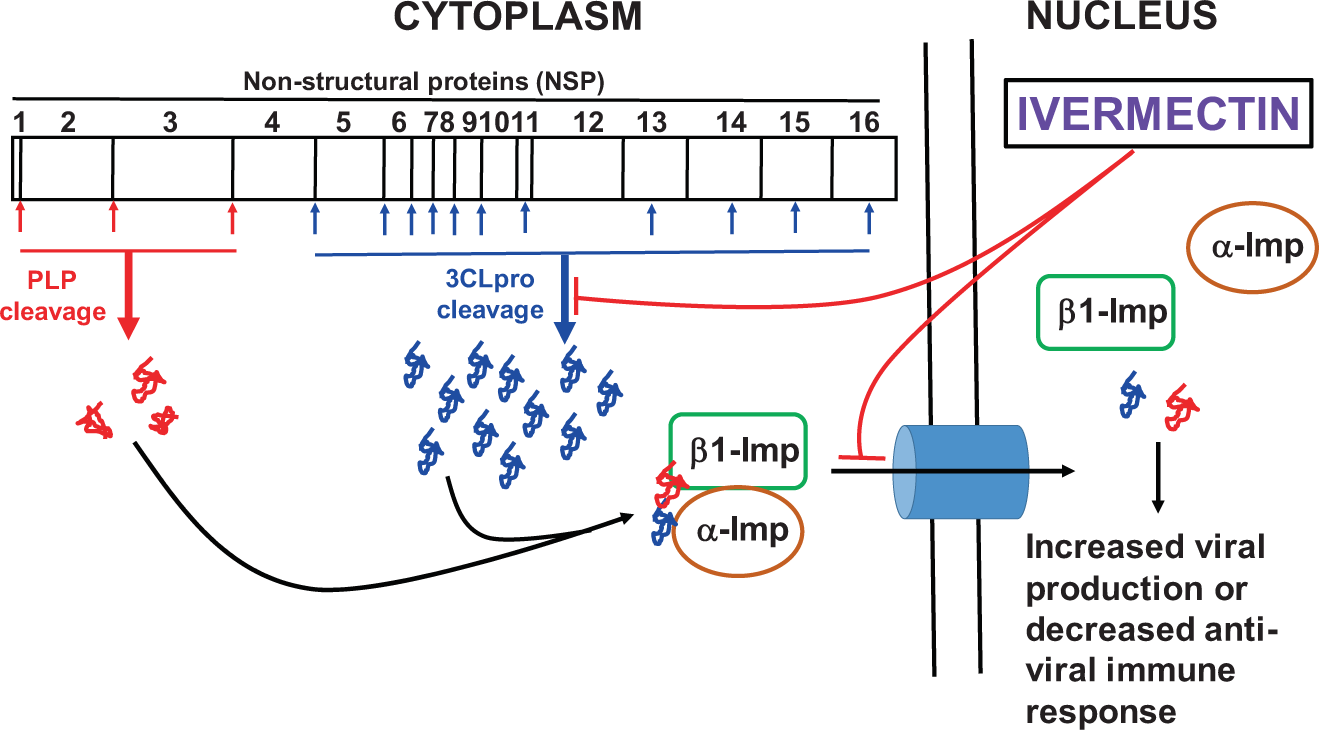 Hypothetical model illustrating the inhibition of SARS-CoV-2 replication by ivermectin mediated through the blocking of α/β1-importin (imp) as well as 3CLpro enzymatic activity. Mody et al (2021)

The Medical Pharmaceutical Industrial complex waged psy-ops warfare against effective and safe generic medicines, including hydroxychloroquine and ivermectin.  Now FDA approves pills from Pfizer and Merck for “emergency use”, and in Quebec where I live, they follow along like lemmings rolling out Paxlovid, claiming the pill is a “game changer.”  All this ignores that once again trials have been compressed so that longer term side effects are unknown, and Pfizer and Merck have no liability while expecting billions in profits.

As the background post below shows in some detail, these pills are not only pale substitutes for the proven generic therapeutics, they risk stimulating further viral mutations and prolonging the infectious activity in vaccinated and pill-popping developed societies.  Fortunately, Africa and much of Asia and South America will be spared this latest public health experiment, as they have natural covid immunity from the virus itself with HCQ and IVM protecting people from severe illnesses.

John Campbell explains in the video below how the new Pfizer pill copies one trick from Ivermectin, without IVM’s other anti-viral mechanisms, resulting in an inferior and dangerous medicine.  I have transcribed the basic message along with excerpts and links to several papers to which he refers. Excerpts are in italics with my bolds.

Pfizer’s new antiviral drug PAXLOVID™ shows very high levels of efficacy in preventing serious disease hospitalization and people dying.  And that drug works in a particular way, what we call a pharmacodynamic action.

But there’s another generic drug called Ivermectin that you might have heard of that works in exactly the same way as that. Now no one’s saying that information has been deliberately suppressed for years while millions of people have died but what we are going to show on this video is conclusive proof from the literature that this modality of action is the same.

How Coronavirus Infects Its Host

Before we crack into that we need to look at what’s happening so when a virus, in this case coronavirus2 gets into a cell. What happens is it makes lots of proteins. It starts off making  these long proteins, out of hundreds of amino acids sometimes. A few thousand amino acids all strung together.

The problem is they’re too long for the job that’s required. So it’s a bit like a building site and when a big log of wood arrives it needs to be trimmed down into bits that fit in your door frames and your window frames. So these proteins need to be trimmed down and it has to be done in a biochemical way.

In the case of coronavirus two, there’s an enzyme called 3CL protease which breaks
down protein into smaller pieces. it’s what we call proteolytic and it will take these long proteins and it will chop them into shorter proteins it’s what we call an endopeptidase. So now instead of having one long protein we’ve got two short ones and these fit together just nicely for the new virus that we’re we’re trying to make.

When there’s another long protein that needs to be processed the 3CL protease comes along ready to chop this up. But now these drugs have bounded up the active site of the protease and they stop the protease from chopping up the big proteins into smaller strings of amino acids. Since they can’t build the virus, it inhibits viral replication.

This is the new Pfizer drug which is designed to block the activity of the sars coronavirus2 3CL, so that 3CL protease now won’t work. It won’t open so i can’t chop my proteins into the correct length to build a nice new virus.   And of course a 3CL protease inhibitor will stop it from making sars coronavirus2 and is therefore anti-viral.

Everyone in human biology has heard of chymotryptin. It’s an enzyme released by the pancreas to digest protein. It’s a protein chopping up enzyme so this chymotryptin-like protease inside the virus is working in a very similar way to the chimbotryptin that your pancreas produces to digest your proteins.

If approved or authorized, PAXLOVID™, which originated in Pfizer’s laboratories, would be the first oral antiviral of its kind, a specifically designed SARS-CoV-2-3CL protease inhibitor. Upon successful completion of the remainder of the EPIC clinical development program and subject to approval or authorization, it could be prescribed more broadly as an at-home treatment to help reduce illness severity, hospitalizations, and deaths, as well as reduce the probability of infection following exposure, among adults. It has demonstrated potent antiviral in vitro activity against circulating variants of concern, as well as other known coronaviruses, suggesting its potential as a therapeutic for multiple types of coronavirus infections.

Viral protease is a valid antiviral drug target for RNA viruses including coronaviruses. (13) In response to the COVID-19 pandemic, great efforts have been made to evaluate the possibility of repurposing approved viral protease inhibitor drugs for the clinical treatment of the disease. Unfortunately, the combination of lopinavir and ritonavir, both approved HIV protease inhibitors, failed in a clinical trial without showing benefit compared to the standard of care. (14) To address this unmet need, several virtual screens and a drug repurposing screen were performed to identify SARS-CoV-2 3CLpro inhibitors.

In conclusion, this study employed an enzymatic assay for qHTS that identified 23 SARS-CoV-2 3CLpro inhibitors from a collection of approved drugs, drug candidates, and bioactive compounds. These 3CLpro inhibitors can be combined with drugs of different targets to evaluate their potential in drug cocktails for the treatment of COVID-19. In addition, they can also serve as starting points for medicinal chemistry optimization to improve potency and drug-like properties.

Identification of 3-chymotrypsin like protease (3CLPro) inhibitors as potential anti-SARS-CoV-2 agents Mody et al. (2021), source of diagram at top. Excerpts in italics with my bolds.

The off-target drugs that are being used to treat non-viral ailments selected by in silico studies were screened for their inhibitory activity against SARS-CoV-2 3CLpro enzyme.

Interestingly, one of the OTD (Off Target Drugs), ivermectin was able to inhibit more than 85% (almost completely) of 3CLpro activity in our in vitro enzymatic assay with an IC50 value of 21 µM. These findings suggest the potential of ivermectin to inhibit the SARS-CoV-2 replication. In support of this, a recent finding suggested that ivermectin (5 µM) inhibited the replication of live SARS-CoV-2 isolated from Australia (VIo1/2020) in Vero/hSLAM cells23. They found that >5000-fold viral counts were reduced in 48 hr in both culture supernatant (release of new virion: 93%) as well as inside the cells (unreleased and unassembled virion: 99.8%) when compared to DMSO treated infected cells.

Earlier studies have demonstrated that the possible anti-viral mechanism of ivermectin was through the blockage of viral-protein transportation to the nucleus by inhibiting the interaction between viral protein and α/β1 importin heterodimer, a known transporter of viral proteins to the nucleus especially for RNA viruses19,20,21,22,23. However, in this study, we have reported that ivermectin inhibits the enzymatic activity of SARS-CoV-2 3CLpro and thus may potentially inhibit the replication of RNA viruses including SARS-CoV-2. These studies suggest that ivermectin could be a potential drug candidate to inhibit the SARS-CoV-2 replication and the proposed anti-viral mechanism of ivermectin presented in Fig. 8 and in vivo efficacy of ivermectin towards COVID-19 is currently been evaluated in clinical trials (ClinicalTrials.gov Identifier: NCT04438850).

Double-click on image to enlarge.

In conclusion, both ivermectin and remdesivir could be considered potential drugs for the treatment of COVID-19. Ivermectin efficiently binds to the viral S protein as well as the human cell surface receptors ACE-2 and TMPRSS2; therefore, it might be involved in inhibiting the entry of the virus into the host cell. It also binds to Mpro and PLpro of SARS-CoV-2; therefore, it might play a role in preventing the post-translational processing of viral polyproteins. The highly efficient binding of ivermectin to the viral N phosphoprotein and nsp14 is suggestive of its role in inhibiting viral replication and assembly. Remdesivir may be involved in inhibiting post-entry mechanisms as it shows high binding affinity to N and M proteins, PLpro, Mpro, RdRp, and nsp14. Although the results of clinical trials for remdesivir are promising (Beigel et al., 2020; Wang Y. et al., 2020), similar clinical trials for ivermectin are recommended. Both these drugs exhibit multidisciplinary inhibitory effects at both viral entry and post-entry stages. Source: Molecular Docking Reveals Ivermectin and Remdesivir as Potential Repurposed Drugs Against SARS-CoV-2

So whereas the Pfizer drug is only working as far as we’ve been told in the proviso press release against one biochemical modality of viral replication, the Ivermectin mechanism is working at many different levels. The fact that the the the Pfizer medicine is only working against one particular biochemical pathway means to me that the virus could learn to avoid that. It could evolve to be drug resistant as indeed the early antiretrovirals did with HIV.

With ivermectin, because it’s working on so many different levels, it is improbable, to put it mildly,that a virus would mutate in a dozen different ways to avoid all those different mechanisms. We’ve talked about six mechanisms today. It’s very unlikely that we get six mutations that could dodge all of those all at the same time.

So I’ve a brief message to world leaders, people that are making the decisions about this. Come on you all, you’re not a horse and you’re not a cow. You’ve got a human intellect. Let’s use it to follow the scientific evidence to save human pain, suffering and death.

So why PAXLOVID? Because it’s from big pharma, is less proven than other drugs in terms of safety, and was approved without input from the external committees and the public. If that inspires confidence, then I don’t know what will give you pause.

Footnote:  This video focused on Pfizer’s pill, but Merck’s Molnupiravir pill is also a one-trick-pony.  See Why Merck Dissed Its Own Invention Ivermectin