A stream flows through the toe of Kaskawulsh Glacier in Yukon’s Kluane National Park. In 2016, this channel allowed the glacier’s meltwater to drain in a different direction than normal, resulting in the Slims River’s water being rerouted to a different river system..

The Weather Network (who do a decent job on local weather forecasting) are currently raving about Glaciers:

You know climate change is getting serious when rivers are resorting to piracy.

Canadian geomorphologist Dr. Daniel Shugar and his team headed to the Yukon last year to study changes in the flow of the Slims River, only to find out the river was gone.

The Slims, which was fed by the Kaskawulsh glacier, has become the victim of the first case of what’s known as river piracy in modern recorded history.

The team’s investigation soon turned up the culprit – the retreat of the Kaskawulsh Glacier, which has been retreating thanks to more than a century of climate warming. 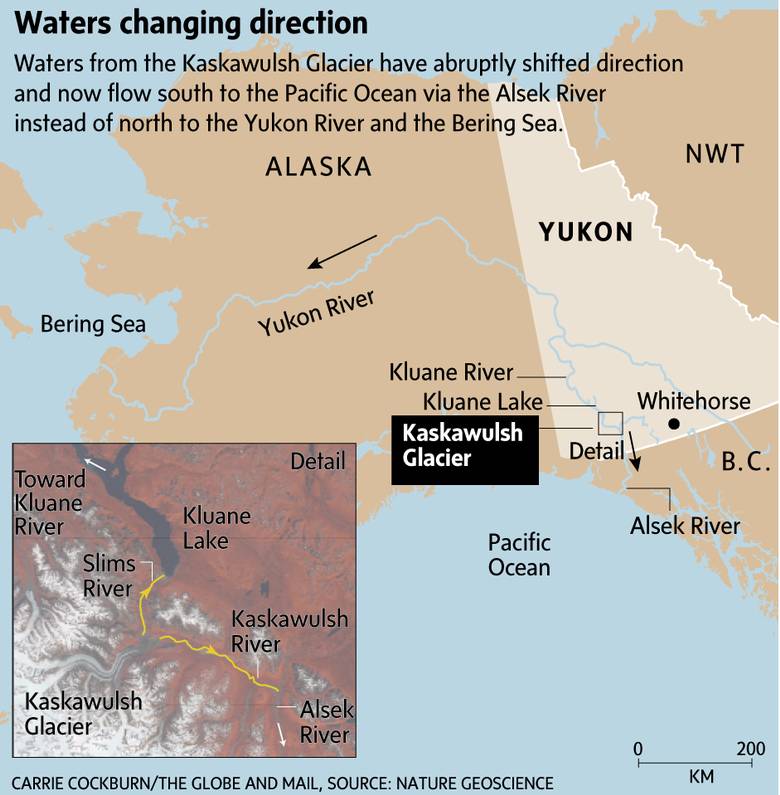 Prior to May of last year, the glacier had been supplying water to two watersheds and feeding multiple rivers; the Kaskawulsh River, which drains to the Pacific Ocean via the Alsek River, and the Slims, which flowed north to the Bering Sea via Kluane Lake.

During the last days of May 2016, melt water at the base of the glacier finally managed to eat through the thinning ice sheet, opening a new canyon and sending the Slims’ share of the water into the Kaskawulsh instead.

Thanks to this abrupt change, water from the glacier that used to flow north to the Bering Sea has changed direction and flows toward the Pacific, instead, leaving the Slims basin high and (mostly) dry.

And Now, the Leap of Faith

In the published paper lead author Daniel Shugar goes on to state:
Based on satellite image analysis and a signal-to-noise ratio as a metric of glacier retreat, we conclude that this instance of river piracy was due to post-industrial climate change.

And others can’t resist piling on:

“To me, it’s kind of a metaphor for what can happen with sudden change induced by climate,” said John Clague, who holds a chair in natural hazard research at Simon Fraser University and was a co-author on the report.

“Climate change is happening, is affecting us and it’s not just about far-off islands in the South Pacific. .  Climate change may bring new changes that we’re not even really thinking about.” said Shugar.

It’s a nice PR touch to call this “Piracy”, but they are “jumping the shark” by claiming humans did this by burning fossil fuels.

“Jumping the shark” is attempting to draw attention to or create publicity for something that is perceived as not warranting the attention, especially something that is believed to be past its peak in quality or relevance. The phrase originated with the TV series “Happy Days” when an episode had Fonzie doing a water ski jump over a shark. The stunt was intended to perk up the ratings, but it marked the show’s low point ahead of its demise.

FIG. 3. South Glacier as seen during its 1986 surge (photo: P. Johnson) and in 2005 (photo: G. Flowers). To facilitate comparison, the black line in each photograph marks the same feature.

For context and scientific perspective we can turn to papers like this one:  Contemporary Glacier Processes and Global Change: Recent Observations from Kaskawulsh Glacier and the Donjek Range, St. Elias Mountains From the Abstract:

The scientific objectives of these projects are (1) to quantify recent area and volume changes of Kaskawulsh Glacier and place them in historical perspective, (2) to investigate the regional variability of glacier response to climate and the modulating inuence of ice dynamics, and (3) to characterize the hydromechanical controls on glacier sliding.

Excerpts (bolded text is my emphasis)

Kaskawulsh Glacier is ~70 km long from its shared accumulation area with the upper Hubbard Glacier, at an elevation of ~2500 m asl, to its terminus ~25 km southwest of the Kluane Lake Research Station, at ~820 m asl (Fig. 1). It provides the source of the Slims River, the primary water input for Kluane Lake to the northeast (which drains to the Bering Sea), and the source of the Kaskawulsh River to the southeast (which drains to the Gulf of Alaska).

One of the most iconic and best studied outlet glaciers of the St. Elias Mountains, Kaskawulsh Glacier was the focus of much glaciological research during the Icefield Ranges Research Project between the 1960s and early 1970s  and contemporary studies suggest that the glacier is temperate throughout. The current area of Kaskawulsh Glacier is ~1095 km2. Ice thicknesses range from 539 m near the topographic divide with the upper Hubbard Glacier and ~500 m at the confluence of the north and central arms at ~1750 m asl to 778 m at ~1600 m asl. The equilibrium line altitude is estimated from 2007 late summer satellite imagery as 1958 m asl, and it appears to have changed little since the 1970s.

The size of Kaskawulsh Glacier has varied considerably through time, with radiocarbon dating suggesting that it expanded by tens of kilometres into the Shakwak Valley (currently occupied by Kluane Lake) ~30 kya during the Wisconsinan Glaciation. In the historical past, Borns and Goldthwait (1966) mapped three sets of Little Ice Age moraines in the glacier forefield on the basis of distinctive variations in vegetation cover, morphology, and the ages of trees and shrubs.

Kaskawulsh Glacier was advancing by the early 1500s and reached its maximum recent position by approximately AD 1680. A recent study based on tree-ring dates suggests that the Slims River lobe reached its greatest Little Ice Age extent in the mid-1750s, whereas the Kaskawulsh River lobe reached its maximum extent around 1717. However, it appears that the glacier did not start retreating from this position until the early to middle 1800s. The recent discovery of a Geological Survey of Canada map of the glacier terminus from 1900 to 1904 indicates that the glacier was still in a forward position at that time, suggesting that most of the terminus retreat occurred in the 20th century.

Recent studies conducted by researchers at the University of Alaska and the University of Ottawa indicate that ice losses from Kaskawulsh Glacier have continued through the latter half of the 20th century and first decade of the 21st century, although evidence for any recent acceleration in loss rates is equivocal.

Of the 19 glacierized regions of the world outside of the ice sheets, the region including the St. Elias Mountains made the second highest glaciological contribution to global sea level during the period 1961 – 2000. Only Arctic Canada is expected to exceed this region in sea-level contribution over the 21st century.

The St. Elias Mountains exhibit high interannual variability in ice mass change, which is due in part to the abundance of surge-type and tidewater glaciers in different stages of their respective cycles. Ice dynamics can be a confounding influence when attempting to isolate the effects of climate as an external driver of glacier change. For example, a surge-type glacier in the “quiescent” phase of its cycle may retreat even in a stationary climate. Catastrophic retreat of a tidewater glacier may be triggered by climate, but it is largely controlled by glacier and fjord geometry. Similar “flow instabilities” exist at larger scales in the form of ice streams and marine ice-sheets or outlet glaciers, the dynamics of which dominate the mass balances (and therefore sea-level contributions) of large sectors of the modern ice sheets. Our ability to project future changes on short (sub-decadal to decadal) timescales therefore hinges on our understanding of internal glacier dynamics, as well as our ability to project future climate in a given region and relate climate to glacier surface mass balance. 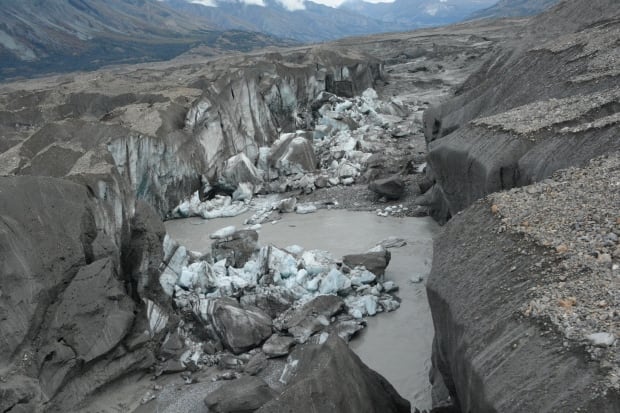 The ice-walled canyon at the terminus of the Kaskawulsh River in the Yukon, with recently collapsed ice blocks, that now carries the vast majority of glacier-front water down the Kaskawulsh Valley toward the Gulf of Alaska and the Pacific Ocean instead of north along the Slims River toward the Bering Sea. (Jim Best/University of Illinois)

Whether climate has fundamentally altered the surging styles of Trapridge Glacier and South Glacier from the faster, shorter, more recognizable Alaskan style to the slower and more subtle Svalbard style is an interesting question. Many small poly-thermal glaciers, whose temperate ice content is largely controlled by meltwater entrapment and refreezing in the accumulation area, are expected to become colder under negative mass balance conditions. It is therefore conceivable that thermal evolution over the course of decades can play a role in altering surge style. However, there is some evidence that both types of surges may be preceded by a prolonged—and until recently, unrecognized—period of acceleration. Thus, a “slow surge” or “partial surge” may simply represent a truncation of the ordinary surge cycle that results from a deficit of mass, rather than a fundamental change in surge character. Mass deficits have manifested themselves differently on the well-studied and temperate Variegated Glacier, where the return interval between surges adapts itself in such a way that surges are triggered at a constant cumulative balance threshold. The nature and timing of future surges of the large glaciers in the St. Elias Mountains will be instructive as we seek a more coherent understanding of the influence of climate on surging.

So it is a familiar story. A complex naturally fluctuating situation, in this case glaciers, is abused by activists to claim support for their agenda. I have a lot of respect for glaciologists; it is a deep, complex subject, and the field work is incredibly challenging. And since “glacial” describes any process where any movement is imperceptible, I can understand their excitement over something happening all of a sudden.

But I do not applaud those pandering to the global warming/climate change crowd. They seem not to realize they debase their own field of study by making exaggerated claims and by “jumping the shark.”
The lead authur, Shugar, sounds like a Michael Mann wannabe, putting out sound bites to please the naive journalists. Maybe he thinks there is a Nobel prize in it if he plays his cards right.

Meanwhile real scientists are doing the heavy lifting and showing restraint and wisdom about the limitations of their knowledge. 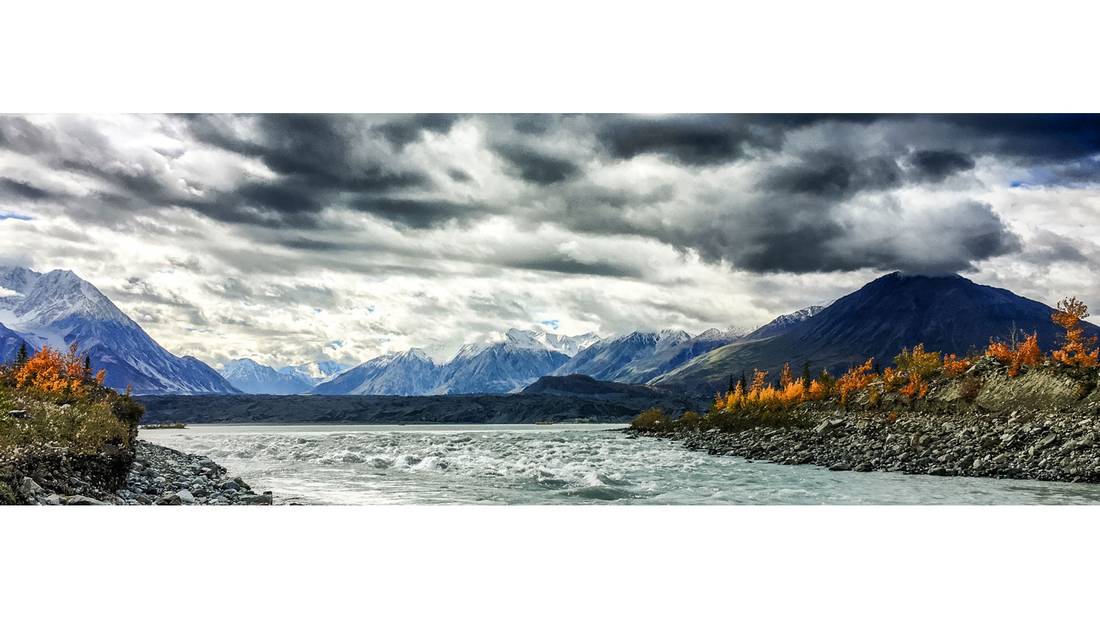 The Kaskawulsh River, as it exits the lower terminus of Kaskawulsh Glacier and lakes. ‘ JIM BEST